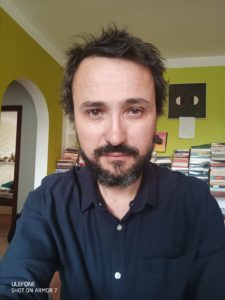 I am a 47 year old philosopher from the Czech Republic. I got an MA and a PhD in Philosophy at Sussex University (UK). I teach academic writing and critical thinking at Palacky University. In my approach to counseling I combine philosophical analysis, Jungian psychology and the passion to understand and help other. My approach in more detail:

In my approach to a client I combine the following:

Philosophical analysis is central to my approach. The key operating principle is to stay committed to clear and consistent reasoning throughout the counselling sessions. Only then can the client experience the liberating effects of deep and honest thinking.

The commitment to clear and consistent reasoning does not entail any particular set of metaphysical assumptions about the world. Thus, it doesn`t entail, for instance, the assumptions constitutive of the so popular scientific reductionism. To be able to effectively address the complexities of human condition requires a conceptual framework that goes way beyond that of the scientific reductionism.

Jungian paradigm is such a conceptual framework. It allows to make explanatory connections concerning the human condition that are deeply illuminating and therapeutic in a broadly existential sense, something that the contemporary scientific paradigm is ill-suited to do. Jung developed conceptual tools that make it possible to recover – consciously and rationally – the meaning behind the key events of one`s life.

Often the client`s situation will involve making an important decision. Philosophical analysis of the parameters of the situation conducted within the conceptual framework of Jungian paradigm will result in the client`s clear and coherent understanding of the situation, its logic and its implications. However, this clear and coherent understanding does not imply clarity about the preferable course of action. The analysis will often yield two or more options to choose from all of which will appear to have the same rational support.

I Ching is the tool designed to adjudicate in such cases. This ancient oracle technique is deeply rooted in the assumption that things out there connect not only causally but tend to cluster around the shared meaning. Jung confirms the existence of this tendency and calls it acausal synchronicity.1 The idea behind the concept of acausal synchronicity is that even very trivial and seemingly meaningless events belong to a cluster built around a meaning, and in this way even the trivial and seemingly meaningless events refer to that meaning. I Ching provides instructions how to translate a simple and seemingly random act – that it asks its client to perform – into a denotator that points the client towards one of the 64 archetypal situations. Typically, the archetypal situation that I Ching refers to as an answer fits the specifics of the client`s dilemma and is perceived as deeply illuminating. For details see here.

The first meeting with a client is meant to establish whether the client`s problem is of a philosophical nature or rather one that is more amenable to psychotherapeutic, psychiatric or even medical treatment. If the latter turns out to be the case, the client is referred to a relevant specialist.

The philosophical counselling process will take the client through the following four stages:

Criticism is the stage when the client deals with the inconsistencies identified in the first stage. There are nearly always several options how to restore consistency. The client will be asked to look at and consider each option carefully and critically. Typically, I will encourage the client to think of a good and coherent counterargument regarding the individual options and invite them to play the devil`s advocate to achieve clear and deep understanding of each option.

Conceptualization completes the transformation of the client`s original cognitive state. At this point, the client is conscious of her life philosophy, its constitutive assumptions and how these relate logically to each other. This newly acquired insight will have to be suitably conceptualized to be operable in relevant life situations. Often, the most accommodating conceptual framework to preserve the insight will turn out to be that of Jung`s analytic psychology.

Consulting I Ching is an optional stage. Sometimes, the client is concerned with a particular dilemma that has a strong philosophical component. The critical analysis of all the relevant aspects of the dilemma hasn`t lead to its resolution. At this point, the client can benefit from a higher order input regarding the dilemma. I Ching will provide such an input.

Availability varies. Please, email me to arrange a chat with me.
Email Me to Schedule a Session